Edible Schoolyard New Orleans works to empower generations of New Orleans children to build and maintain healthy relationships with food, the natural world, themselves, and their community.

Stefin Pasternak, is the lead chef educator at Samuel L Green Charter School, home of one of Edible Schoolyard’s two teaching kitchens, and one of their five school gardens. He directs two students to set the table for a communal meal.

“You guys work together to set out plates,” assigns Pasternak. “We need 10 plates please. Nathan and Damiri, can guys will do cups and water. Will you do ten napkins? And will you 10 forks?”

“We’re talking with fourth graders about the idea of preparing from seed to table by making tater-tachos,” he tells me.

“In kindergarten we do what’s called the food ABC’s,” explains Pasternak. “It’s not cooking at all. It’s mostly about exposure to foods. Manners, hygiene, and just the process of really savoring and tasting foods completely.”

Kindergarteners learn about and taste foods for each letter of the alphabet. And they spend time talking about it, understanding it.

“It’s comparing them,” says Pasternak, “and identifying where we might know them from, new foods especially.

“So today we ate Middle Eastern food,” explains Pasternak. “We made dolmades -- stuffed grape leaves – with grape leaves from our arbor that the kids preserved last week.”

And fourth graders, like Logan Livermore, explore what it means to make things from scratch, really from scratch: seed to table.

“One of the things we did is try to teach the beauty of eating a meal in community, says Claudia Baker, Executive Director of Edible Schoolyard New Orleans. “So many families these days don’t have time to sit down together every night at 6 o’clock every night and have dinner.”

Baker says the entire relationship to food, community, and healthy eating is what Edible Schoolyard fosters.

“Just as important as learning about where the food comes from and how to cook, is learning how to enjoy it in community,” says Baker. “It’s about passing plates, waiting until everyone is served, expressing gratitude for the people who prepared the food and where it came from, and enjoying it together with your friends.”

“These are wonderful,” declares Jose Chavarria. “They taste like potato and nacho all mixed together, and it tastes real good.”

I ask if this is something Jose could make on his own, and he responds: “I think so.”

As students get older, they learn more of a pre-professional culinary curriculum. Michael Riley, who’s in 8th grade, was harvesting collard greens and dinosaur kale in the Edible Schoolyard garden, just outside the teaching kitchen.  I asked if he likes to eat every thing that he grows?

“Yeah,” says Michael, “because when you buy something from the grocery store, you don’t know how far it traveled, but you can pick it right from the garden.”

The garden is a lush third of an acre, and Michael’s class was busy making bundles of parsley, Swiss chard, and curly kale as well as harvesting cabbages. Each month they sell their produce at the Farmers’ Market inside the French Market. The students rotate garden jobs everyday. Today Michael’s the time keeper, but yesterday he was the boss. I asked which job he likes better.

“The boss because I like to make sure everyone is doing their job and it helps me for future reference at a job.”

Michael says helping people and communicating with people are skills he’ll use no matter what his future work is. 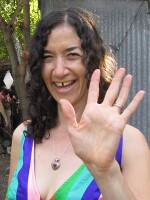 Eve Abrams
Eve Abrams first fell in love with stories listening to her grandmother tell them; it’s been an addiction ever since.
See stories by Eve Abrams
Latest Stories
Related Content